Over recent years, Peterborough Bridge Fair has taken on the mantle of East Anglia’s largest fair, at the expense of Cambridge Midsummer Fair. And it was back in business for 2021, which is more than could be said about the once proud Cambridge event.

After an enforced absence in 2021, the Bridge Fair opened on Peterborough’s Embankment from September 30 to October 10.

Lessees John Thurston & Son invested in an extensive advertising campaign, with large posters on all approach roads and colourful banners closer to the site itself.

Unfortunately, there was no official opening ceremony or traditional sausage and mash dinner this time, however the showpeople continued the tradition of reduced prices on all rides and shows during Fair Day, which is always the first Tuesday in October.

A very cold wind blew across the Embankment and no doubt deterred some people from attending. During the other 10 days of the stay, business was described as very spasmodic; better for some than others.

At the Cathedral end of the ground, Jonathan Scarrott’s well-presented High Flyer was a newcomer as was its neighbour James Crecraft’s nicely-lit Super Trooper, although James left after five days to fulfil commitments elsewhere.

George Heath Jnr’s large Burger Heaven kiosk took the eye with its retro style décor and Shane Whyatt’s Balloon Madness was something different for the children. On side ground the bold traditional décor on Tommy Boswell’s variety of games added colour to an attractive fair.

A month later (Saturday, November 6), Peterborough’s Spooktacular Fireworks Display took place at the East of England Arena. The lessee for this one was Larry Gray & Sons.

From January 2022 the World’s Fair is back as a monthly print and digital publication, available by subscription only.

View all posts by David Springthorpe → 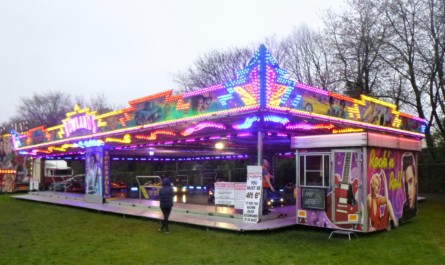 Back where it belongs: Charter Fair returns to the streets of Ilkeston