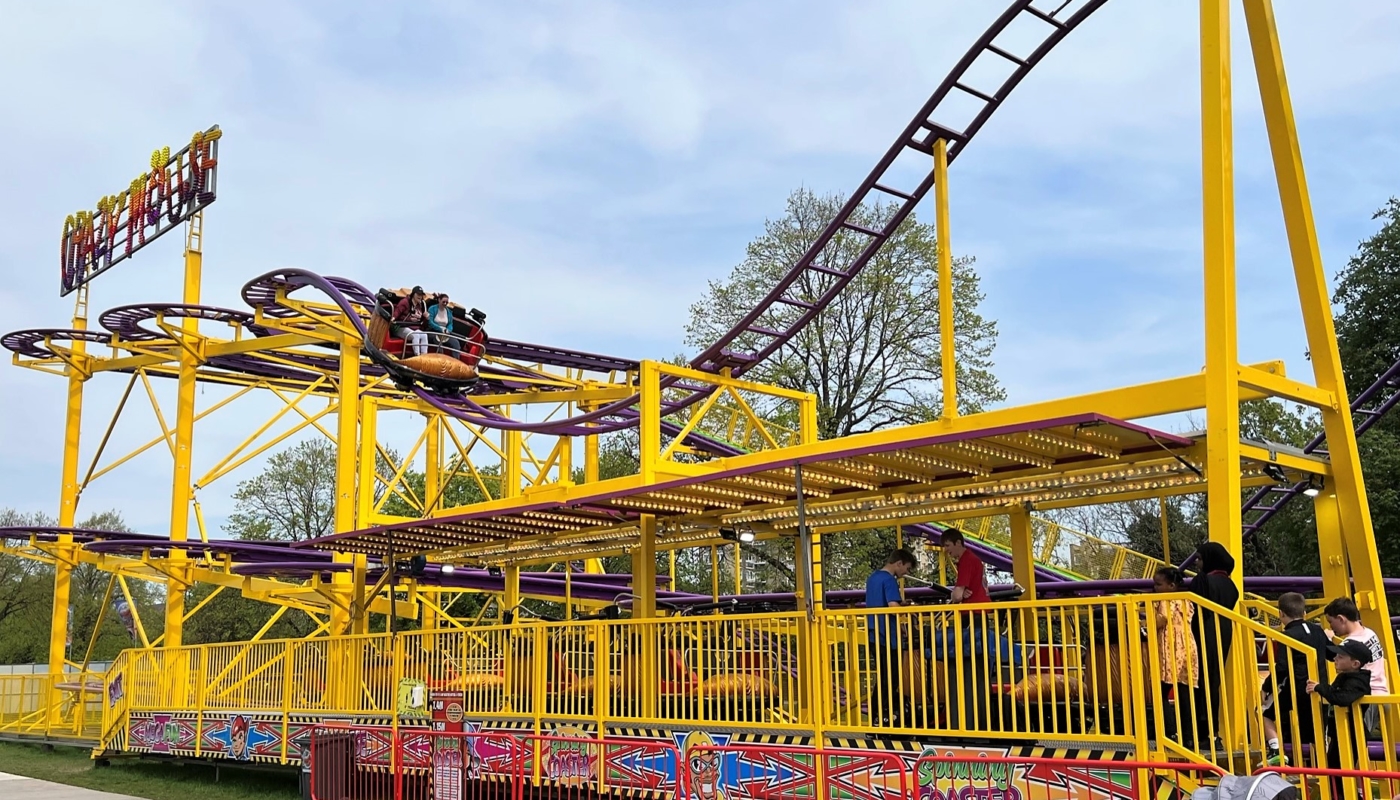 Presented by Darren Matthews and family, Funderworld Theme Park returned to Bristol to encompass Easter and the May Day weekend, running from Friday 8 April to Monday 2 May.

After a temporary move to Hengrove Park last year, the spacious Durdham Downs was once again the venue, and the weather remained favourable for the best part. The Funderworld site takes up only a tiny proportion of the Downs, and ample free parking is afforded, a real bonus in Bristol. Many thousands of vehicles a day pass the site, which is bordered by a major arterial road.

An impressive circus style entrance fronted the fenced-in ground, and upon entry the catering units formed a square with ample bench seating. With metal track laid out in a large rectangle, the layout of the machines can only be in a square formation with masses of open space in the middle.

Facing the main road were the towering structures of the spinning coaster and the spectacular Italian-built Loop Fighter on the perimeter, while the 60m Sky Swing could be seen a mile away on the approach from Clifton. Air Maxx, the other aerial ride, was on the opposite perimeter, and the dodgem was also positioned near the entrance.

AA directions signs were placed on all approaches along with colourful advertising boards, and the perimeter fence was dressed with eye-catching banners. A new ticket system gives good value in a crowded entertainment market, and buys unlimited riding. A tot’s band cost £7.99, the Adventurer £12.99 and for those seeking white knuckle rides, a Thrill Seeker band cost £16.99. Entry for non-participating adults was £4.00.

Extensive use was made of the firm’s website and social media, featuring drone footage, photos and competitions. The event was well covered in the Bristol listing guides and other print, radio and TV media platforms.

There were three roller coasters and core elements of waltzer, dodgems, Sizzler and Miami. The Reverchon spinning coaster looked like new, with extensive works carried out recently, and has been returned to the original striking yellow and magenta finish.

Most of the equipment was owned by the Matthews family, with local Showmen operating games and stalls, including members of the Moore, Crole and Loveridge families. The Matterhorn recently purchased from Colin DeVey by Richard Hart was once owned by Darren Matthews’ father, Bernard.

Children had an excellent choice of juveniles, fun houses and inflatables. The presentation was of the highest quality, with the staff and the lessees wearing corporate red polo shirts, resulting in a very professional image. CCTV monitoring and visible on-site security ensured a family friendly environment, there were plenty of toilets on site, and litter was cleared on a regular basis.

Darren Matthews told World’s Fair he was pleased with the level of business, but recruiting local staff had been challenging, which is currently an issue facing the whole of the hospitality and leisure industry.

View all posts by Guy Belshaw →

Swinging With The Sausage Man