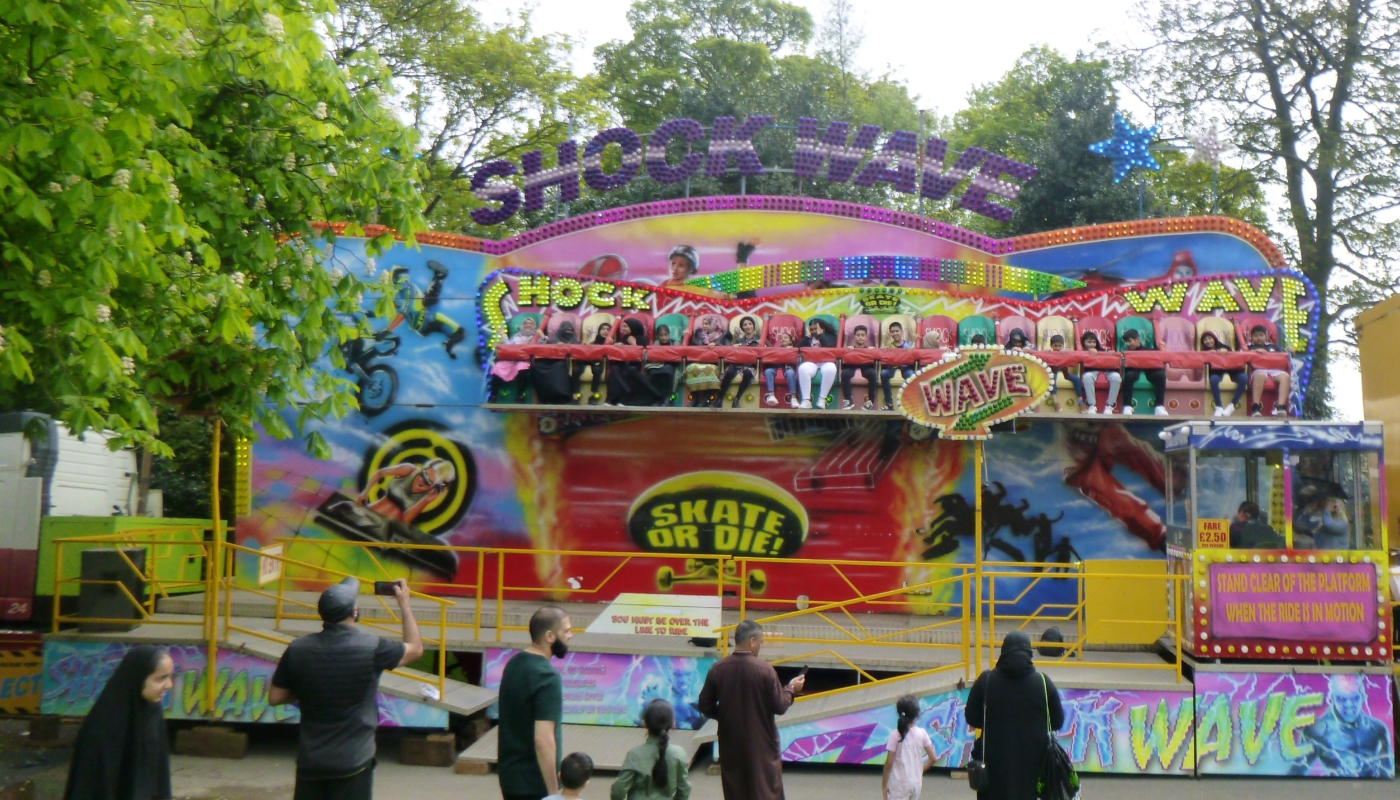 As part of Restricted Rocks Festival from Saturday 30 April to Sunday 1 May, Stanley John Cubbins once again organised a small fairground presentation to run alongside the concert.

Taking place at Blackburn’s Witton Country Park, 14 tribute bands covered some of the biggest names in rock and indie for what was the third event since 2019.

The fair was much smaller than last year’s due to the number of other events taking place around the North West, which saw some of tenants from 12 months ago having commitments elsewhere.

There was a quick return to Witton Park from the Easter fair that had finished just 12 days prior, for Stanley John Cubbins’ Sizzler Twist and Joe White’s Freak Out Afterburner, which were the only two large rides in attendance. The latter was on a first time visit to the festival.

In support were Adam Wright’s Jump Zone bungee trampolines, inflatable slide and Minion inflatable play zone, which were also here for the first time, and three catering kiosk from the lessee.

Three funfairs took place to celebrate Eid, one of which was Gore’s Fun Fairs’ family presentation over two weekends, from April 23 to 24 and April 30 to May 3, incorporating the bank holiday Monday.

Up until the pandemic the Gore family had been bringing children’s rides into the park for several years, and held three events after the restrictions were lifted in 2021.

No cash was taken on the rides, with ride tickets available to purchase at the ticket kiosk priced at £1.50 each. Visitors could also take advantage of a super saver deal, with rides priced at £1 each when 25 tickets were purchased for £25.

We were told trade had been steady over the two weekends, and during our visit on the bank holiday Monday a steady flow of visitors had started to arrive in the early part of the afternoon.

Gores would have a weekend off before moving on to Bold Venture Park in neighbouring Darwen to present a children’s fair over the weekends of May 14 to 15 and 21 to 22.

Two days after the Gores left the park, more fairground attractions pulled on to the ground to build up for the annual Eid in the Park Festival, which has taken place here since 2017 (with the exception of the pandemic years).

The event is organised by the charity Eid in the Park in association with Blackburn Rovers FC and their charity Blackburn Rovers Community Trust. This year saw Eid Salaam prayers take place on the pitch at Ewood Park Stadium on Monday 2 May, the first time this had ever happened at a British football club and an event that drew worldwide acclaim.

The festival in the park over the weekend of May 7 and 8 had the usual funfair, donkey rides, face painting, charity stalls and food stalls, along with football coaching and inflatables from Blackburn Rovers.

In the ever-changing line up of rides and attractions that attend this event, only Stanley John Cubbins’ Sizzler Twist had been seen here before. The only other major attraction was Charles Harrison’s Shockwave Miami.

In support was Scott Harrison with his Wacky play truck, mini jets, mini train, inflatable galleon, inflatable slide and giant mixed games unit, with two catering kiosks on the ground from the Quality Catering Co. On our visit during mid afternoon on the Sunday we saw the fair very busy, with all the attractions doing well.

At the other side of Blackburn in Queens Park another funfair was taking place as part of the Eid celebrations. Another regular event at this time of year, it’s organised by Billy Hill and took place from Friday 6 to Sunday 8 May. The last day was a family fun day, which saw plenty of children’s entertainment in place.

We called in on the Sunday afternoon to find yet another busy fair, with plenty of visitors enjoying the family fun day.

Main photo: New to Eid in the Park this year was Charles Harrison’s Shockwave Miami.

View all posts by David Powderley →

For Sale by Online Auction