We are looking for a level playing field (and other locations) for fairs both physically; but more importantly, metaphorically and administratively, between Scotland and the rest of Great Britain.

The Scottish Parliament is to consider a bill unifying the licensing requirements for members of the travelling funfair community across the country’s 32 local authorities, following the formation of the Scottish Showmen’s Guild cross party group.

Each of the 32 councils currently charge wildly varying fees; currently it takes three months to arrange a fair in Scotland; which is two months longer than in the rest of Britain (even though positive discussions between Showmen organisers and councils take place all the time on an informal basis).

Currently, major decisions on how to deal with the coronavirus pandemic and how businesses should operate are taken on an almost daily basis with the decision-making process reduced to days and sometimes hours.

This shows that the administrative process in Scotland can be fleet of foot and so to delay a decision on the operation of an activity as simple as a fair by three months mandatorily, appears unreasonable and out of step with the administration of other activities in Scotland, whose annual agreements to trade – once a year – are less bureaucratic.

By contrast Showmen have to go through the unnecessarily complex administrative process in this way, weekly.

There is no flexibility to switch operating locations within a town, if inclement weather intervenes – the weather does not give us three months’ notice of its intentions.

There is very wide variation in the processes that each of the 32 councils adopts in administering fairs and a travelling Showman, by definition needs to navigate the needlessly varying processes in order to organise the operation of basically the same activity – operating a funfair.

There appears to exist none of the dialogue between the 32 councils that COSLA seeks to engender, as a result of the existing 1982 act; nor the sense of joined-up thinking that is both essential and the bedrock of the operation of funfairs and the national work of Showmen in Scotland; as is routine across the rest of Britain.

The Health and Safety Executive (HSE) already regulate the operation of Funfairs in minute detail with their statutorily mandated Guidance: HSG175, ‘Fairgrounds and amusement parks: Guidance on safe practice’ and the practical guidance that this confers relates to all the legislation that could ever impinge on the industry and is updated regularly to ensure that this is the case.

The HSE were instrumental in working with the industry and the Westminster and Holyrood governments in the Covid-19 Guidance on safe operation of funfairs during the pandemic.

The Showmen’s Guild, as the leading trade association for the fairground industry, with 90% of the operating Showmen as members across Britain, as in Scotland fully endorses the HSE’s Guidance and indeed, the following of HSG175 is mandatory for their operating members. Not only that, but within the Showmen’s Guild’s rules it is mandated for all operating Showmen Members to have a copy of HSG175 to refer to at their fairs at all times.

In this way, Funfairs / Fairgrounds are already heavily regulated and with public accountability and governmental authority and in a way that is evenly administered on a national basis; reflective of the movement of operating Showmen with fairs across Scotland and Britain generally.

The Showmen’s Guild, through its rules, themselves scrutinised and accepted on three separate occasions by government; which are publicly available to view; contain further detailed regulation of their operating members (90% of the industry, operating nearly 100% of the fairs in Scotland) in minute detail; so as to be practical in the organisation and management of all aspects of fairground operation.

Throughout this time, Scottish operating Showmen have been in parallel constant dialogue with the 32 councils across Scotland (described above) and  the continuous understanding of purpose of arranging existing fairs successfully, as well as introducing new ones, both stand-alone fairs and as part of other activities such as Highland Games and Galas, has run through this dialogue – until 1982, when the dialogue was  interrupted by the unnecessary introduction of the  Civic Government (Scotland) Act 1982.

The ambition of the act appeared straightforward enough initially; but the act, that was proposed and passed without  consultation with the Showmen’s Guild or Scottish Showmen themselves, whose whole working and business lives it sought to govern with an extra layer of administration;  made it so that fairs were now to be regulated  in common with many other activities of public life as one form of regulation.

This did not take into account the idiosyncratic characteristics of operating fairs, as opposed to a fixed operation like a restaurant or public house; which are predominantly indoors, while fairs are predominantly outdoors and, importantly, by their nature, travelling between council areas rather than being static in one.

Moreover, key to the 1982 act, was that each of the 32 Scottish local councils could adopt a different, individual approach to fairs; without taking into account that the operation of fairs is nationally regulated as a specific operation that is the same notwithstanding where it takes place and this localised approach is completely at odds with this.

For example; One council says it charges £50 per temporary licence. Another applies a sliding scale, in one case charging over £6000. One council indicated it had banned travelling funfairs altogether.

This is a cumbersome, unnecessary and unfair system and interferes with the good administration of fairs and the dialogue between Councils and Showmen.

This is the very opposite of  what presumably was the intention of the act and, we submit, that it was an oversight that fairs were swept-up into this administrative extra layer of administration, by accident; without the clear understanding  by the policy-makers of the bill in or prior to 1982 of the existing, continuing regulation of fairs that already exists (as described above) and the local dialogue between councils and showmen that hitherto existed (also described above).

Apart from the 200 Scottish Showmen families who operate in Scotland, as part of the necessary mix of attractions that is important at fairs, especially larger fairs; there are Showmen from other parts of Britain who travel to Scotland to complement fairs and operate; just as some of the Scottish Showmen travel to other parts of Britain to operate similarly.

Kirkaldy Links Market in April is the prime example of this, with it being the acknowledged largest fair of its type in Europe; with showmen – Showmen’s Guild members – drawn from across Britain to participate.

These visiting Showmen with their attractions, including the unique and cutting-edge ‘Air’ ride,  have ended up, unwittingly, caught up in the extra administrative burden of the strictures of the  Civic Government (Scotland) Act 1982; which is so alien to their otherwise successful operation of fairs within any of the 314 Districts and 343 local councils of England; the 22 Unitary Authorities and 730 Community and Town Councils in Wales; or the 11 local councils in Northern Ireland.

Now, the Funfairs Licensing (Scotland) Bill seeks to bring the Scottish system in line with English regulation, reducing the time and cost of the application process.

There is no equivalent onerous process for applying to organise a fair across Europe, as our colleague members of the European Showmen’s Union attest.

The Showmen’s Guild nationally, endorses the Travelling Funfairs (Licensing) (Scotland) Bill introduced as a Member’s Bill by Richard Lyle MSP to the Scottish Parliament on 29 April 2020.

The Showmen’s Guild nationally hopes that the common-sense approach that has marked the dealing with the current pandemic across Scotland at all levels, will prevail and inform the  MSPs in making their decision on this practical reform of the Civic Government (Scotland) Act 1982, with its unforeseen and unintended negative consequences, by the Travelling Funfairs (Licensing) (Scotland) Bill, so that Showmen in Scotland  can look forward to getting back to work for the 2021 season and beyond, armed a renewed partnership of trust and dialogue with the 32 Scottish boroughs;  to make the best of the unique and responsible entertainment heritage, that Fairs bring to communities in all parts of Scotland.

January 7, 2021January 8, 2021
David Linden MP is presented with a Certificate of Appreciation by Scottish Section Chairman Billy Hammond at the Section Annual Luncheon in November 2019. 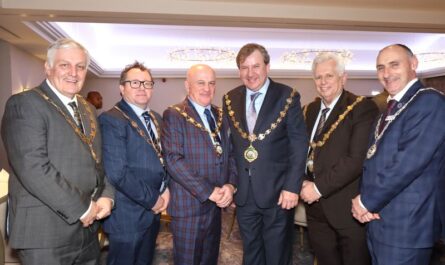