Removing the rebate could put the fairground industry out of business, Guild says.

Previous industry consultation responses warned in 2018 that removing the concession would be unworkable, but were ignored.

Showmen heard last year that Chancellor Rishi Sunak had plans to remove the tax rebate on non-road machined (NRM) in his first budget.

The Guild worked with the Treasury on the latest consultation over the summer of 2020.

They submitted a detailed response that included the many steps taken to reduce the industry’s carbon footprint.

The economic position on the need for continued use of red diesel for entertainment – with no other useable power sources for electricity – has been detailed to the Treasury, as well as Defra.

Also, what the Treasury described as the ‘perverse’ outcomes of:

• loss of entertainment for the public

• loss of the viability of the industry for Showmen

• Loss of rental income of 5000 events annually for local councils

Showmen need the red diesel tax reduction to be retained as they work to reopen fairs in spring. There are costs to reopening and showmen, for the most part, will have had no income for 18 months.

Whilst other industries will also be affected, Showmen stand to be hit hardest. They have no option but to use red diesel in generators to power their rides.

They also depend on the public paying for the attractions, with already squeezed budgets.

The Showmen’s Guild, the trade association for the fairground industry, representing over 2100 operating Showpeople and 24,000 family members overall, fears any changes to red diesel duty could see the community face increases of nearly 50p per litre.

Red diesel currently has a duty of 11.1p per litre compared with 57.7p for standard diesel.

Red diesel is the lifeblood of the fairground industry: it alone powers all operations of the entertainment as well as domestic power whilst Showmen are on site at fairs.

Showmen use regular diesel on the road, like everyone else. The Guild’s Rules forbid abuse of the fuel rebate concession and carry heavy fines for infringement.

Larger industries (construction, airport etc) who make up the bulk of the 15% diesel-use overall have far greater ability to absorb the concession than the fairground industry.

The Showmen need the reduced cost red diesel to continue in order to survive economically.

Showmen are now facing a nail-biting wait to see if their business is going to have a future after Wednesday’s Budget.

Scottish Section Secretary Jane Rodgers is presented with a retirement gift by Chairman Billy Hammond at the Section Annual Luncheon in November 2019.

HOLYROOD RECEPTION FOR THE SHOWMEN 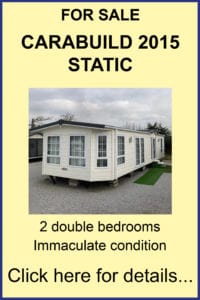