Richard Lyle MSP, Scottish Parliament Member for Uddingston & Bellshill, hosted a Reception on behalf of the Showmen’s Guild of Great Britain at Holyrood on January 14.

Attending were Guild President Philip Paris and Central Council delegates, along with

The Reception took place the evening before the two-day Central Council meeting, which was held for the first time in Edinburgh this year instead of London.

It followed a debate in the Scottish Parliament on the work of the Showmen’s Guild. Central Office officials and Central Council delegates were in the gallery to hear the debate.

The Reception was well-attended by MSPs and council officials from across Scotland, along with other dignitaries including representatives of the Freemen of Newcastle upon Tyne led by Sir Leonard Fenwick.

Scottish showman Preston Irvin had on display some of his working fairground models.

Richard Lyle MSP, who is sponsoring a Bill in the Scottish Parliament to reform the onerous licensing regulations that has plagued the fairground industry in Scotland for many years, led the speeches.

The Minister herself also was also presented with a Certificate of Appreciation, as was event host and Convenor of the Cross-Party Group, Richard Lyle MSP.

Photo 1: Guild Past President David Wallis with Lawrence Bishton and Colin Pawley of the Notts & Derby Section at the Holyrood Reception.

Photo 3: Western Section delegate Steven Hill chats with Jim Johnson from the Stewards Committee of the Freemen of Newcastle upon Tyne at the Holyrood Reception. 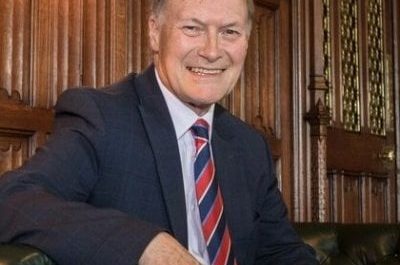